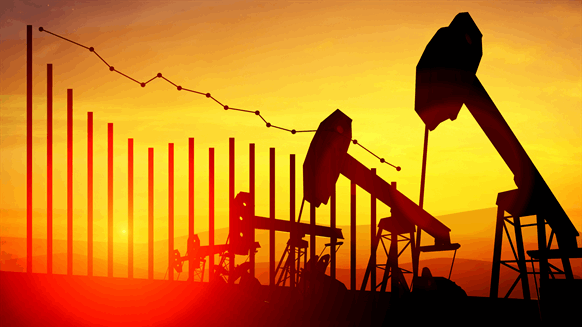 The February Brent crude oil futures prices moved in the same direction as the WTI but at a more modest rate. The Brent settled at $59.61 a barrel, losing 67 cents overall during the early-week session.

“Oil prices stayed down Monday, following last week’s losses that saw the Brent contract fall 2.3 percent week-over-week and WTI slip 2.7 percent,” said Delia Morris, Houston-based commodity pricing analyst. “Along with equity markets, the front-month contracts for both Brent and WTI were weighted down by global growth fears and uncertainty around the upcoming Fed policy meeting, which will outline economic expectations for 2019.”

The U.S. Federal Reserve will hold its Federal Open Market Committee (FOMC) meeting Tuesday and Wednesday of this week.

“With bearish sentiment lingering in the market – net long positions are at their lowest levels since 2016, according to the Commodity Futures Trading Commission (CFTC) – much of this can be ascribed to doubts around the efficacy of OPEC+’s commitment to cut 1.2 million barrels per day of crude production in order to balance global oil markets,” continued Morris. “The specter of an upsurge in U.S. production in the back half of 2019, when additional oil pipeline capacity will come onstream, presents another negative catalyst for oil.”

The price of a gallon of reformulated gasoline (RBOB) also ended the day lower. The January RBOB contract price declined by more than two cents to settle at $1.41.